St Helens (the city, not the mountain) City Hall 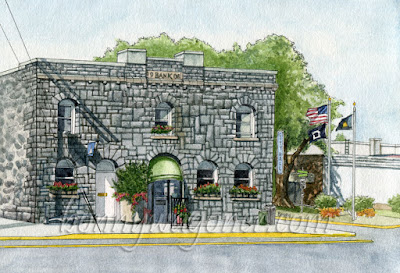 The story behind this one is way back in the beginning we were working on line drawings for our sketches because the local art organization (not the Guild) was going to use our drawings as fundraisers on coloring postcards. We selected sites to go to each week. This day was perfect because they had roped off the street in preparation for Thirteen Nights on the River, a local to do every Thursday night throughout the summer so we had the entire parking lot in front of city hall all to ourselves. It was going to be a punishingly hot day so we set up in the shade of a giant oak across the parking lot. As is my practice I began drawing from the top down on the page. It was absolutely perfect right up to when a food truck pulled up in front of the building to set up for that night completely obscuring my view of the bottom floor... and I only had the top floor drawn. As luck would have it I had forgotten to take a reference picture before I started for "just in case" and just in case just happened. I ended up having to go back the following day to finish the drawing. 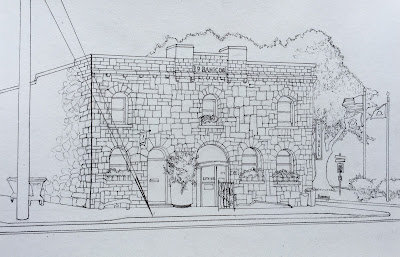 Long story short the coloring cards never materialized - well they did but someone had traced photos for them. (Yes you can tell.) When I found out our efforts were for naught I put my collection of drawings in my portfolio and that was that. Recently I was going back through them and thought I should "colorize" all of them. I must say I rather enjoyed this coming together.  You'll notice I added the buildings in the background so the scene was true to what it is.  Originally I left it out because the line drawing was more balanced that way and the point of the image was the city hall.  By adding the background it became a true urban sketch.

I only randomly add to this blog so if you want to catch my posts as soon as they are published click on the subscribe button at the top of the page or Follow by clicking on the follow button.
Posted by Bonny Wagoner at 8:58 AM No comments:

I bought a Noodler pen because it came highly recommended.  It had two things going for it that appealed to me.  First, it was made in America. I'll buy American made whenever possible (but it has to work).  Next, it had a refillable reservoir eliminating having to go the route of buying refills that are then thrown away when emptied.  I could never get the Noodler I received to fill it's reservoir so basically it is an expensive dip pen and not usable for sketching on site.  I looked up on line how to fill it in case I was doing it wrong.  Nope.  I asked another artist friend of mine to give it a try.  It also didn't work for her.  So I don't know what its problem is and in spite of the rave reviews some have for the pen I'm not going to spend any more time trying to figure it out.

In the meantime I've been using technical pens that work ok but they aren't refillable so when the ink is used the pens have to be tossed when empty... something I'm trying to get away from.  I ordered two new pens to try at the beginning of this year.  One is a highly recommended fine point Lamy (made in Germany) and the other a Platinum Carbon Desk Fountain Pen, super fine (made in Japan).

First impression of the Lamy - very smooth but I should have ordered the xtra fine point. The fine tip is larger than I would prefer to work with.  I ordered the refill converter - that's sweet.  I like the cap - feels secure, excellent quality.

First impression of the Platinum Carbon Desk Fountain Pen.  Love the tip.  I also ordered the refill converter for this pen so no refills necessary.  The pen works beautifully.  The only thing I don't particularly care for but is not a deal breaker is the length of the pen.  My preference is for something more compact but with that said, I find the pen to be well balanced.  It could be a matter of just getting used to it.  I don't especially like the cap.  I think I will be checking to make sure it doesn't come off until I'm sure it doesn't come off.

The fact that I can refill both pens reservoirs without any fuss is a huge plus in my book.  I'll use the Noodler ink I bought for my Noodler pen that's fired.  Ok, I'm off to drawing now.  😊

I only randomly add to this blog so if you want to catch my posts as soon as they are published click on the subscribe button at the top of the page or Follow by clicking on the follow button.
Posted by Bonny Wagoner at 8:27 AM No comments:

With the current state of the union (mess)

When I was filling out the Crater Lake Artist in Residence application there was a section where I had to propose what it was that I wanted to do if granted the opportunity. I kept thinking they are going to think I'm crazy for wanting to draw the lodge. The thing is if one takes the time to go through the Oregon Museum archives there is really very little about this historic lodge perched on the side of the lake. They have a small collection of photos recording some of the construction of the original part of the lodge and the ranger housing in 1915 but mostly what they have are newspaper clippings about the eminent threat of tearing it down because of the poor construction practice used to build it, people rallying to save it and then the extensive reconstruction in 1991. And yet there is almost nothing showing the lodge as it appeared then or even today in the archives.
I was just finishing my second coloring book on Timberline Lodge and had set aside time to drive to Crater Lake National Park to scope out a possible future project in the summer of 2017. Because it is so different from Timberline I really had to give the project some thought. These are a handful of the quick sketches I did on site as I pondered how I would capture the essence of the building, what I would feature, how would I go about it (click to view larger).

By the registration desk: 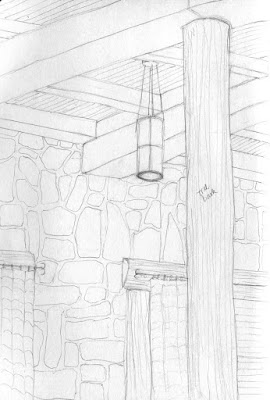 In the common area: 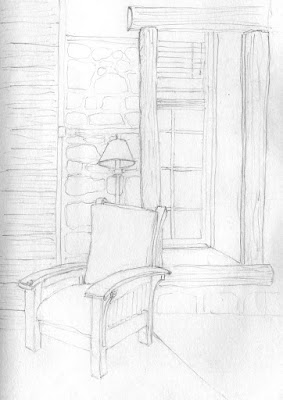 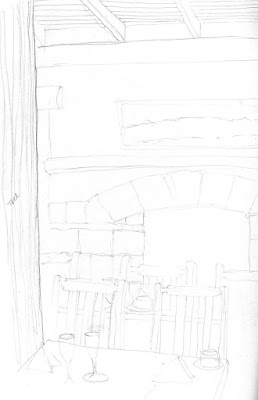 I applied for an Artist in Residence program on site in the Crater Lake National Park that if selected would give me up to two weeks to work on site. With the current government shutdown all of the Artist in Residence programs are in limbo so I'm working on a plan B just in case this state of the union drags on to the point the entire program doesn't get off the ground in 2019 and of course if by chance I'm not selected this year. I'm sure my proposal for my project was probably not what they originally had in mind and probably completely different from what other artists would have proposed. With an average of 533 feet of snow per year the lodge is only open during the summer. Nothing replaces working on site in person so one way or another I'm going to Crater Lake to work on this project this summer.

I only randomly add to this blog so if you want to catch my posts as soon as they are published click on the subscribe button at the top of the page or Follow by clicking on the follow button.
Posted by Bonny Wagoner at 5:29 AM No comments:

My second planned Artist in Residence application is successfully deployed, this one for Crater Lake National Park. There was only five pages of required information, statements and proposals. Trust me, it didn't make it any easier. This time up to ten samples are allowed on a thumb drive. I've tortured myself for the past week over which to include, which should I exclude, back and forth. They require the packet to be mailed. Thanks to the government shutdown there won't be anyone on the other end looking at this until things straighten out but I will have gotten my application in before the deadline and in theory have a shot at it when they are open for business again.

Find out first what's going on.  I only randomly add to this blog so if you want to catch my posts as soon as they are published click on the subscribe button at the top of the page or Follow by clicking on the follow button.
Posted by Bonny Wagoner at 12:17 PM No comments: