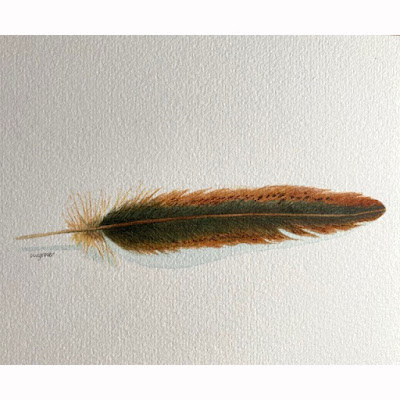 I’m watching my daughter’s chickens while she moves to her new place and gets everything set up. I have been collecting the miscellaneous feathers they leave behind in their coop. I decided yesterday to test drive some new Holbein watercolors that I’ve been putting off opening because they are expensive so even deciding what to use them on has been a challenge. You know the thought processs, save them for something special. The other side of the argument is what if they aren’t as great as rumored they are? Well it occurred to me I have the perfect model to put the paint through its paces. A feather. The reason to test paint is different manufacturers use different binders which makes the pigments behave in sometimes unexpected ways so this was a test to see what it will and won’t do and how far can I push it for the results I want. So far I'm liking them.

Posted by Bonny Wagoner at 8:25 AM