The rain was coming down at a 45 degree angle the day I was out at Wildwood Golf Course to begin this piece but in spite of that there was an intriguing ambiance to the view from the clubhouse.  We were invited to come back when the weather improves.  Apparently the view from the hills is spectacular so I'm looking forward to returning mid-summer when hopefully we get dry weather.

Watercolor foundation, colored pencil makes the magic and a touch of gouache for the sign. Dimensions 4-1/2" x 10" on 140# hot press cotton paper.
Posted by Bonny Wagoner at 7:40 AM No comments:

Draft of the cover for the new book 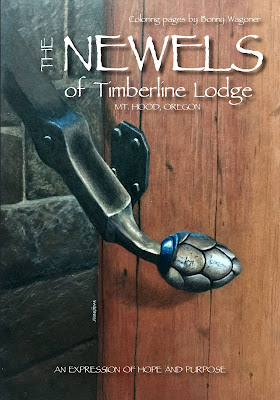 It gets exciting when the pieces begin going together.  As I was pondering which drawing or what collection in what format would best represent all of the newels, it occurred to me I have the perfect image already drawn for the cover.  Because it doesn't depict any particular one of the newels it could be any one of them.  I originally drew this for a presentation to show how my line drawings turn in to finished colored pencil drawings.  I have a couple of tweaks to make but I like this for the cover.
Posted by Bonny Wagoner at 1:12 PM No comments:

It's kind of hard to see these but they are my notes on the newels at Timberline in order going up the stairs from the ground up. I spent Sunday afternoon going up and down the staircases to make sure I had them in order and properly identified.

Two of the newels are so worn I've had problems trying to figure out what animal they were. As luck would have it one of the rangers had an out of print book that listed them. Unfortunately there weren't pictures of each newel back in the day but at least now I have a list of what they were. One I had guessed was a mole but I questioned who would take the time to carve a newel of a rodent? Well, apparently someone did.  It is a mole.

I also measured all of them. It may very well be just interesting trivia I never use but I thought the difference of dimensions between each newel was fascinating.

Posted by Bonny Wagoner at 6:21 PM No comments: