Fun at the Portland Art Museum

I've had a new journal for some time now and as is often typical of blank pages in new books I was finding it difficult, next to impossible, to begin working in it.  Not that there was any urgency to begin in the new as my old journal still had several unused pages left in it but I could feel the resistance building.  At first I thought I'll just set up something in the front indicating it's my 2017 journal.  Nope, at least I had the where-with-all to draw whatever in pencil because I've erased it about six times now not being pleased with whatever it was I drafted to start with. 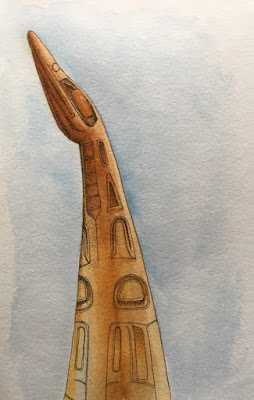 Then there was an invitation to try the Meetup in Portland for "Drink and Draw" at the Portland Art Museum.  I hadn't tried it before but decided to give it a try.  And since there was an implied suggestion to share your work I took my new journal so no one would feel tempted to peek at last years doodles.  It's not that I don't want to share but my deal with myself is anything in my journals isn't serious.  It's my time to explore, play, and I have zero expectations for what comes of it.  That's not so say others would feel the same so I kept it simple with going with the new journal so there wasn't an option to browse other sketches.

When we got there the organizers had decided that this meeting would focus on positive and negative spaces of the Rodin sculptures on display.  After spending the last 10 days snow bound which renders the landscape in to a giant monotone negative and positive space that was the last thing I wanted to do.  So instead I found a charming 1850-ish Tlingit ladle carved out of a sheep horn to draw.  I was particularly impressed with the artists ability to carve the mirror image of the carving on each side of the horn.  It was delicately beautiful.

Posted by Bonny Wagoner at 2:42 AM No comments:

When you know it's going to take a while....

If I'm going out to breakfast I usually go early so I'm there before the rush.  Unfortunately today I waited until I finished all my chores first so that put me in the rush.  No worries, that makes for the perfect time to get a quick sketch in.

The plant between my table and the door.
Posted by Bonny Wagoner at 8:15 AM No comments:

The coloring book is finished! 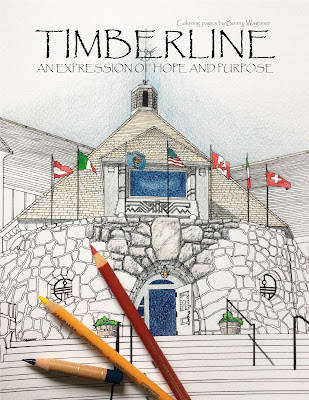 I had a few adjustments to make on the proof I received and now it's done.  It is now available on Amazon.

The folks in my plein air/urban sketching group have chosen to continue meeting over the winter.  We've moved indoors and have shifted to drawing/painting our food.  It's actually quite challenging and fun.  This is my shrimp omelet, hash browns with onions on top and whole wheat toast in watercolor.  Making mental note to self to choose something more colorful next time. 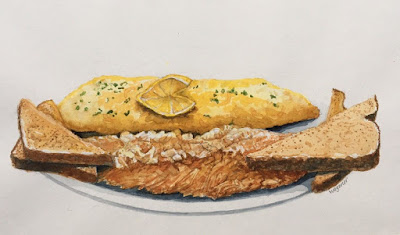 Currently on display at the Brown Butter Bakery in Scappoose, OR through the month of January.
Posted by Bonny Wagoner at 4:37 AM No comments: